Everest: An Artist’s Work That Informs and Inspires 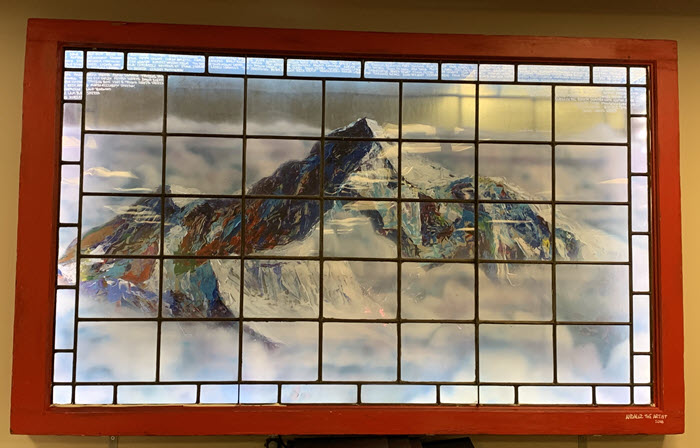 On November 18, our office became home to a new work of art — one uniquely dear to my heart, which weaves together seemingly unrelated threads: friends, devout strangers, the personal, the professional. “Everest” is a piece that represents coming together, helping one another and the power of hope. These are themes that are echoed in marriage and divorce — areas my work naturally prompts me to think about often.

The work of art, inspired by the famous Himalayan peak, was painted by my friend Andaluz, whom I’d earlier commissioned to add color and style to my auto racing team for a worldwide rally. With a studio in Greenlawn — a North Shore hamlet where I spent part of my youth — Andaluz had become known as an unofficial resident artist: his murals adorn some of the town’s buildings. When I learned that my friend had lost his studio space, I immediately called him to commission an art piece, using a 200-year-old church window that had hung in my home as his canvas.

For me, the window and its history were a symbol of positive energy — of light shining through even the darkest of times. And when “Everest” was unveiled in our office in November, I was overwhelmed with the hope it represents. To me, it symbolizes both the struggles we face when things feel darkest and our ability to rise from the ashes. And we can only begin that journey with the help of someone’s outstretched hand, letting us know we’ve nearly made it.

For most people, marriage is the Mount Everest of relationships. Making it to the top together unscathed is a huge challenge. It’s an even greater challenge for both partners to make it down the mountain healthy, happy and arriving at the same time.

If marriage is akin to a mountain climb, then divorce is like the death zone — a real place on Mount Everest where climbers have died because they made a fatal error: pausing where oxygen is so thin that fatigue and confusion take over. There have been couples who embarked on an Everest climb together only to have one not make it past this zone — leaving the other the terrible choice of either staying with the doomed partner, facing certain death, or heading down alone. (The names of those who are frozen for eternity appear at the top of the painting that now hangs in our office.)

Divorce could be said to present the same difficult choice. It forces a spouse to decide whether they should stay in an unhappy but known place or move on to face, at least temporarily, isolation and loneliness. For most people, the best path is the most difficult one — to keep moving, to head down the mountain alone to the new life that awaits. But it’s one that requires the traveler to have hope and help.

Climbers who have ascended to the peak of Mount Everest do so by relying upon native guides known as Sherpas, who are uniquely able to steer them through the overwhelming and sometimes treacherous terrain they encounter on the way up — and down — because they know the dangers and steer clear of them. When you’re navigating the difficult descent of divorce, you want a lawyer whose skills are like those of the Sherpa: knowledgeable about the terrain, fearless in the face of storms, and supportive from start to finish.  When you have an experienced and knowledgeable divorce lawyer, along with supportive friends and family, you will be able to climb “down the mountain” so you can embark on a new life — one where light and hope offer all the illumination you need.

If you are struggling to get through a divorce, make sure you seek out the help you need. Contact my Long Island family law firm, Bryan L. Salamone & Associates, P.C. for caring advice and wise counsel.