Is the Divorce Rate Rising or Falling in the United States? 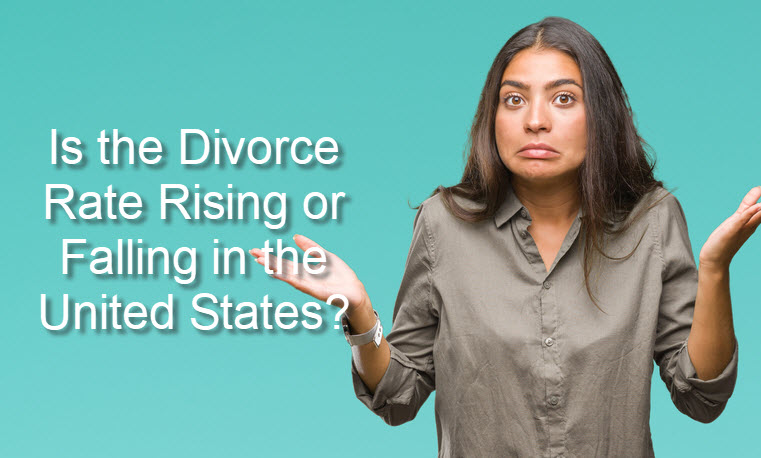 You’ve probably heard the “common knowledge” that half of all marriages in the U.S. end in divorce. However, the numbers show something different and also shed light as to whether marriages are ending in divorce more now than in the past.

According to divorce statistics compiled in 2020, the actual percentage of marriages that end in divorce fluctuates between 40 and 50 percent. In fact, the first year of the pandemic saw the divorce rate hitting its lowest point in 50 years. Similarly, the rate of marriage hit a low during the first pandemic year that was marked by lockdowns and bans on social gatherings. Other findings from 2020 include:

There is no doubt that the pandemic years — which were just beginning in 2020 — are changing the landscape of marriage and divorce. The stress of lockdowns, financial uncertainty, and the political discord that’s infected the country has contributed to marital strife. This could increase the likelihood of divorce for the next several years.

One trend that seems to be picking up steam is “gray divorce,” the term used to describe when older spouses decide to part ways. Today, 25 percent of all divorcing couples are in their fifties and couples over 65 make up one in every 10 divorces. Whether this phenomenon has to do with the fact that people are living longer, the new-found financial independence of older women, or some other reason, more and more people are looking to make the best of their senior years, and that sometimes begins with severing marital ties.

At the Long Island office of Bryan L. Salamone & Associates, P.C. in Melville, our goal is to get our clients through to the other side of divorce thoughtfully, efficiently and with favorable terms relating to property division, alimony, child custody and other matters. To schedule a free initial consultation with one of our experienced New York family law attorneys, call 1.631.479.3839 or contact us online.