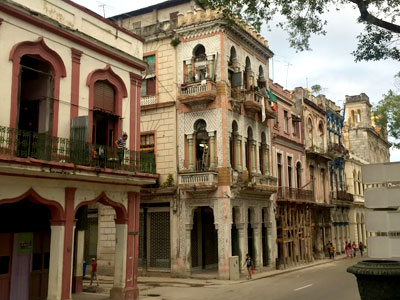 In October 2016, Bryan L. Salamone, Esq. engaged in the new Cannonball Run Rally[2] wherein over 70 exotic and super cars ran from Massachusetts to an ending finale party in Cuba.  While in Cuba, Mr. Salamone had the opportunity to observe and analyze the legal ramifications of Family Law/Divorce in the communist country.

Cuba’s Economy and its People

The most striking thing about Cuba is that its economy is a snapshot of 1959 and/or the Soviet Union circa 1976 through 1980.  In fact, the city of Havana, according to Mr. Salamone, was post-apocalyptic with few stores or consumer goods to be found.  From the window of the Hotel Parque Central there are no neon lights or storefronts.  There are just cars from the 1950s and the people going about their business.

Corporate buildings in Cuba remain intact but empty.  Major office buildings and the headquarters of corporations such as General Electric remain vacant or sparsely occupied with government offices.   Mr. Salamone inquired through numerous contacts in Cuba as to the standard quality of life and standard of living.

Standard of Living and Quality of Life in Cuba

According to Mr. Salamone, the average Cuban worker earns $20.00 per month.  That is their salary whether they are doctors, lawyers or a street sweeper.  They all seem content and happy and rely on their families and their network of friends as the social entertainment.  There is an air of “post-apocalyptic” emptiness in Havana.  In fact, the lack of consumer goods, shops and bustle leaves one to look at buildings in disrepair and the charm of 1950s life/or squalor.  Indeed, while touring the central area of Havana it became evident that all of the historic buildings are in great disrepair on the inside and/or on the outside.  Without regard to the value of a specific architectural building in the center of Cuba’s biggest city, Havana, regular people are assigned to live in the apartment units in these buildings.  Over the years, they have become extremely dilapidated.  Floors have collapsed onto the lower floors, and sometimes the entire buildings have been burned down, or burned out.  It appears that the very same apartments in New York City would garner $20,000 a month in rent (due to the central location near Central Park) but in Havana, they are given to the regular families that earn $20.00 per month.  The regular families divide it, sub-divide it, expand and contract as the tenants themselves.  They also fix their living spaces haphazardly as it appears that there is sometimes electric next to water and all building codes are non-existent.

The Duplicative Jobs and the Lack of Incentives for Communist Workers

Entering Havana, Mr. Salamone noticed there were two Ministers of Health, one received a form from each visitor and the second one took the form and put it in a basket.  It was obviously a double job due to the fact that the Communist government needed to give out jobs.  This is very common.  The Cuban automobiles are American cars from the 1950s and are rolling death traps that rarely go more than 30-50 miles per hour according to Mr. Salamone.   He has great experience with automobiles and was able to drive several of these cars.  They have been retro-fitted with diesel engines, taken from North Korean cars or tractors and all of the cars have been fixed over the decades (55 years or more) with parts that were made from junk or other machines.  For example, if a 1959 car has a broken window, a store window is cut to size and replaced where the auto safety glass was originally installed.

With the decay of central Havana, lack of incentive for workers, the lack of private industry, consumer goods and ability to flourish and thrive economically, Cuba seems oppressive, dark and lifeless.  The only thing that Mr. Salamone reported that contradicted this was that the people remain vibrant, passionate and colorful.  They are a happy and creative population and the Castro regime seems to sponsor local artists as well as artists from other countries, which helps Cuba’s art scene grow.  To the extent the art is censored, it is unknown.

Divorce, Custody and the Family Law in Castro’s Cuba

Cuba legalized divorce in 1969 and divorce by notary public occurred in or about 1994.  Approximately 70% of the marriages in Cuba end up in divorce and there is no stigma for divorce, as Cuba is “officially” atheist.

Divorce in Cuba is very easy if it is “uncontested”.  If the Cubans can agree to divorce, the divorce can be as little as $5.00 and be done almost immediately.  When they contest the divorce, it could take months.  Notary Publics do the divorce in Cuba, and unless one of the parties is unemployed, there is no maintenance (alimony).

With respect to the housing in Cuba, there is a housing shortage.  Estranged and divorced couples often continue to live together.  This makes custody determinations non-existent.  Additionally, married couples (and divorced couples) often share their homes, or their units, with other relatives.  Close living situations after divorce ease custody arguments.  Divorcing couples put up plywood walls to separate themselves from each other and continue to live together after the divorce, separated only by such subdivisions.  Each party remains in the homes and moves freely from each side.  Many women who divorce prefer to return to their parents’ home.  Custody is mostly matriarchal.  However, based on early retirement, the housing shortage, lack of employment for the elderly, often extended families become involved.

There is a black market for home swapping based on ownership restrictions and housing shortage.  Cubans, by and large, cannot sell their homes.  The State controls almost all the property and moves must be approved.  However, often when families split up they will swap a one large apartment for two small ones due to divorce, and it is an “informal” or black market swap.  There are a high percentage of fraud/sham marriages as a result of the need for such marriages to facilitate exit visas and/or for money.  Possessions are split according to Cuban law and possessions are often meager.

[1]TeamSalamone was formed in 2009.  It has hosted and participated in charity events that have obtained well over 2 million dollars in funds directly for charitable causes.