Most Couples Say Money Was a Factor in Their Divorce 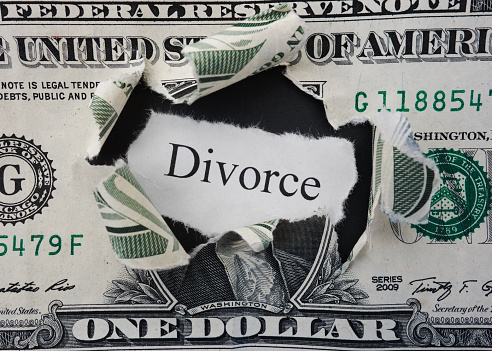 It might not come as much of a surprise, but most divorced individuals in a recent survey say money played a major role in their decision to end their marriages.

According to the Experian survey, 59 percent of divorced people said financial struggles and arguments were a reason for their divorce, with 20 percent saying it played a “big” role. Additionally, 44 percent said their former spouses destroyed their credit ratings, while 59 percent said they wish they would have been more financially independent when they were still married.

Financial woes can cause serious problems in a relationship

As any experienced divorce attorney knows, financial challenges are a significant reason why many couples decide to dissolve their marriages. However, there are ways couples can prevent finances from wreaking havoc on their relationships.

First, couples must always communicate about their spending, debt and other financial practices. Both parties need to be completely aware of their significant other’s financial situation heading into a marriage so they are not blindsided by debt or credit issues, and both should have an equal say in financial matters during the marriage.

In addition, couples should consider splitting financial responsibilities. Couples can either split bills they are responsible for, or take turns paying them each month. They should also sit down to discuss their budgeting and financial planning on a regular basis to make sure both partners are on the same page.

Although financial strains can be overcome, some challenges are too great to overcome. If you need to move ahead with a divorce, speak with a knowledgeable Long Island family law attorney at Bryan L. Salamone & Associates to learn more about your legal options.

By Bryan Salamone | Published May 1, 2017 | Posted in Divorce | Tagged money as factor in divorce | Leave a comment