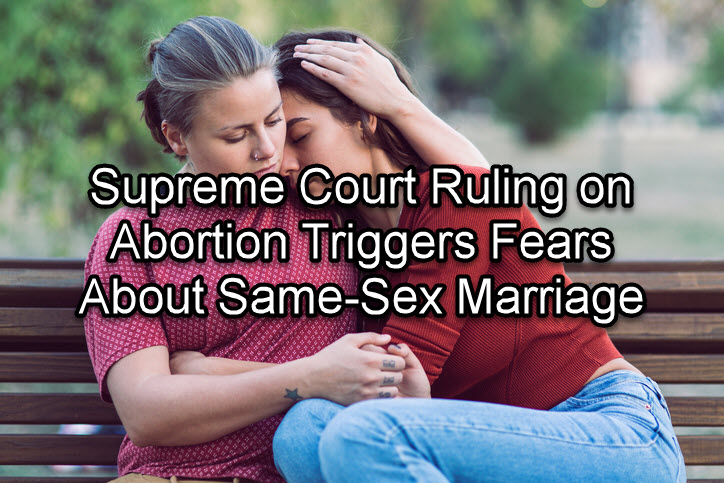 Many same-sex married couples and LGBTQ advocacy groups have questioned whether the Supreme Court decision overturning Roe v. Wade might be used to threaten their legal status. In Dobbs v. Jackson Women’s Health, the court ruled that there is no right to abortion under the Constitution, giving states the power to ban the medical procedure within their borders.

Some might not see the immediate connection between abortion and same-sex marriage, but a closer look at the legal reasoning in Dobbs might be cause for concern among LGBTQ Americans. In the decision, the majority placed heavy emphasis on the fact that the Constitution does not include any mention or reference to a right of abortion. Moreover, the holding authored by Justice Samuel Alito said that despite the fact that Roe had been in place for more than a half-century, the right to an abortion is not deeply rooted in American history, and therefore can be reversed.

Obergefell v. Hodges, the Supreme Court case declaring there is a Constitutional right to same-sex marriage, came in 2015, several decades after Roe. As marriage equality was granted even more recently, many LGBTQ advocates believe that it might be vulnerable to being overturned on similar grounds as the court used in Dobbs. Presumably such a reversal would leave same-sex marriage policy up to the state legislatures, potentially creating massive legal confusion with certain marriages being recognized in some states but not others.

Some of those who could be affected are planning ahead. Same-sex couples are using alternative legal strategies to protect the same rights often granted by marriage. Many couples are executing durable power of attorney authorizations and executing wills and estate planning documents. Also those who have adopted children are making sure both parents legally adopt so that joint custody is not based solely on marriage. Note that these efforts are highly dependent upon individual circumstances. Consulting an attorney familiar with the legal considerations that affect same-sex couples is a good first step.

While concern is warranted, there is no reason to panic. Currently there is no case before the Court that could potentially overturn Obergefell in the near future. There are also significant distinctions between abortion, which the Dobbs majority says involves “potential life” and same-sex marriage, which does not affect parties besides the two consenting adults. In the event that Supreme Court takes action against marriage equality, New York law would protect same-sex marriages within the state.

Bryan L. Salamone & Associates, P.C. represents LGBTQ clients in divorce cases and other family law matters throughout Long Island. To set up a consultation with a knowledgeable New York attorney, please call 1.631.479.3839 or contact us online.