Living With Your Girlfriend/Boyfriend and Plan to Marry? Why You Need a Co-Habitation Agreement 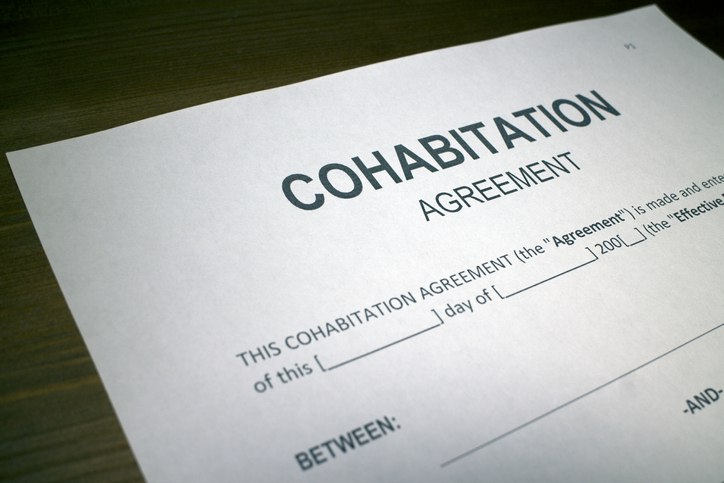 IF YOU ARE LIVING WITH YOUR GIRLFRIEND OR BOYFRIEND, AND LATER MARRY THEM, YOU NEED A CO-HABITATION AGREEMENT OR YOU MAY BE PAYING MAINTENANCE (f/k/a “ALIMONY”) FROM THE DAY THEY MOVED IN WITH YOU. THEY CAN ALSO HAVE YOU THROWN OUT OF YOUR OWN HOME.

The most recent changes to New York State Family Court Act and Domestic Relations Law expand the definition of support. Until 2010 it was clear that support (we are speaking of alimony/maintenance only) was calculated from the day you got married until the day you got divorced. The new law which went fully into effect in 2017 states that one of the factors the court should take into account in deciding the amount and duration if a maintenance award, is “the existence and duration of a pre-marital joint household” DRL 236 (B) (a) (6). See also Kaprov v. Stalinsky [145A.D.3d 869 Supreme Court, Appellate Division, Second Department, New York].

There are hundreds of thousands of people living with their lovers in New York State. It is my opinion that most everybody is completely unaware that if they marry the person they are living with, in the event of a divorce they may be paying maintenance based on the day they moved in together and not the day they got married. Hypothetically, a man could live with a woman for fifteen years. He can then marry that woman and divorce her six months later. Under the new law he may be facing alimony for five through seven years based on the length of the co-habitation prior to the marriage. Conversely, had the man broken up with his girlfriend after fifteen years and married someone else, there would be no such alimony lookback. The alimony would be one to three months if anything on a one-year marriage if there was no prior co-habitation. The moral of the story is: if you live with someone there may be a hidden entitlement that is being created, usually without anyone knowing of this. This is a new law. In our scenario above, if the man did not live with the woman for fifteen years, and just dated, there would be little to no maintenance. Possibly one to three years maintenance based on the one-year relationship. It all is contingent upon how long you lived with the person you are marrying prior to marriage. It is the establishment of a joint household and creation of levels of responsibility, commitment and codependence that allows an entitlement to spring up well before the marriage in such events.

If you have been living with someone for fifteen years now, you may be hesitant to marry them. Possibly you never believed that when you marry them you would have exposure for fifteen years of living with them. Regardless of love, marrying someone that you have been living with, may not be physically prudent for you without the proper agreement. The agreement is called a co-habitation agreement and it does not allow the person your living with to obtain springing entitlements based on a pre-marital co-habitation. The agreement will provide that the co-habitation should not be considered for subsequent maintenance calculations and, equally as important, it will designate who has true residence at that address. If you were not expecting to pay for what you did in the past, you should not marry the person you are living with. If you so not want to get thrown out of your house, you should make it clear in an agreement that the residence that you are in is your residence and not your girlfriend or boyfriends. There must be an agreement in case there is a disagreement or some violence that delineates whose residence it truly is in the event of an order of protection and/or what is called Pendente-Lite relief which is Latin for “relief during the pendency” which means payment while the divorce is going on. These dangers and areas of exposure should be dealt with in a co-habitation agreement. Often people cohabitate before they marry for financial reasons and then when they marry, traditionally their incomes increase as time goes by. You may find yourself married and having to pay for a large period of time where you lived with your spouse well before you got married. Many cases during that period of time, neither person had anything; they were a young couple and never imagined that far in the future someone would be paying the other person for their time in the relationship when they lived together prior to marrying.

Bryan L. Salamone & Associates, P.C. is the largest and most successful divorce and family law firm on Long Island. Mr. Salamone has been protecting clients and commenting on the law for the media for over twenty years. Mr. Salamone’s firm is actively litigating in Long Island; New York City and the five boroughs and handles hundreds of divorces each year. Mr. Salamone is available for consultations on selected cases free of charge at their Melville location.